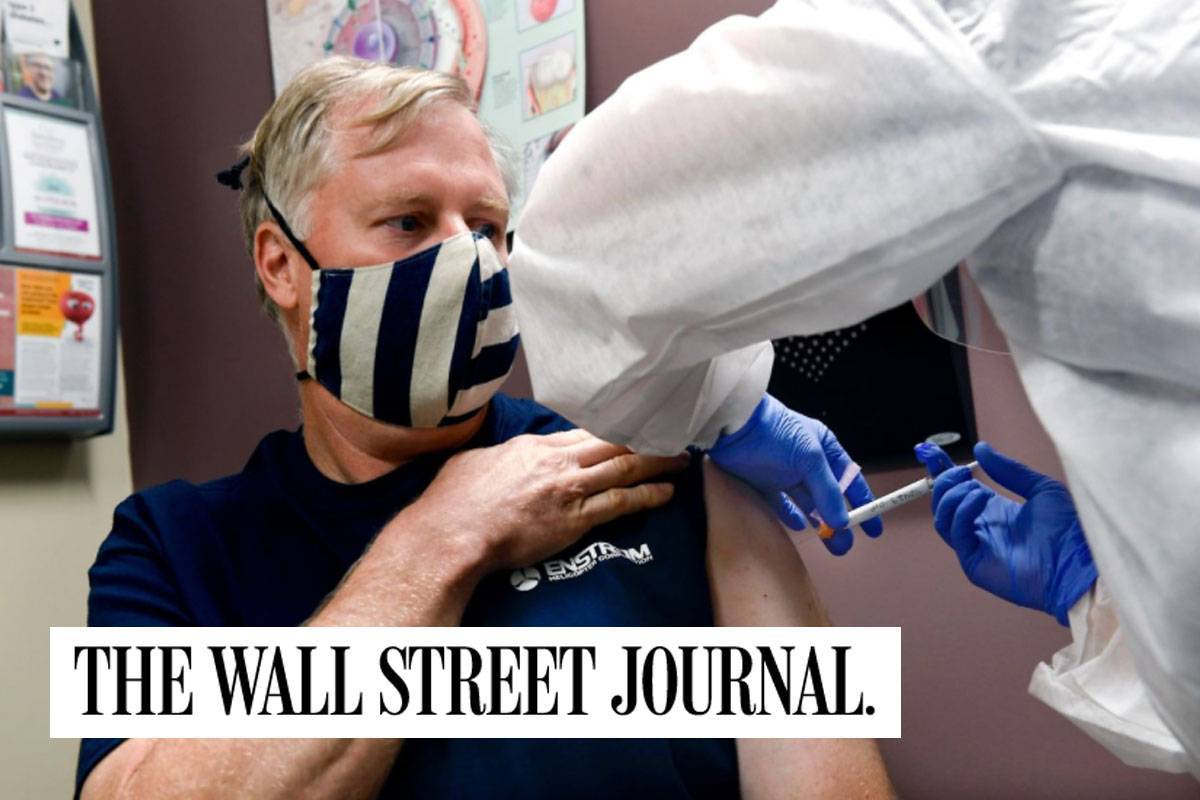 So far this year, U.S.-listed biotech companies have raised roughly $9.4 billion in initial public offerings, already beating the $6.5 billion raised in all of 2018, the biggest year on record, according to Dealogic data going back to 1995.

This year’s biotech issues have jumped an average of 34% on their first day of trading, the biggest average first-day pop for the sector since the tech boom in 2000. 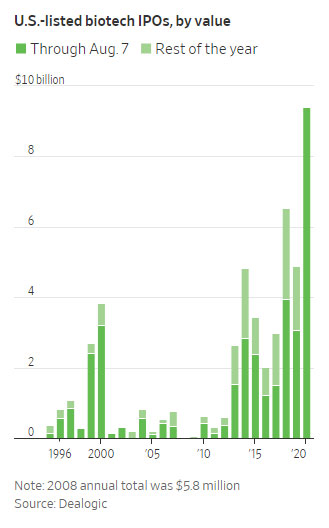 The recent surge in biotech stocks extends beyond IPOs, as investors chase companies working on potential vaccines to combat Covid-19. They also anticipate the industry may benefit from more investment by governments in drug discovery and development.

Still, there are reasons to be skeptical. Biotech stocks in general can tend to be volatile, depending on the success or failure of companies’ key drugs. Some longtime biotech investors are wary of the run-up and warn there are risks to chasing companies at early stages of development.

The Nasdaq Biotechnology Index is up 12% so far this year, compared with the S&P 500’s 4% rise. In June, as the coronavirus pandemic swirled, the exchange-traded fund issuer ETFMG launched a product that focuses specifically on companies engaged in the testing and treatments of infectious diseases. The fund, the Treatments, Testing and Advancements ETF, trades under the ticker GERM.

Public companies are already taking advantage of the flood of money into the biotech sector by issuing more stock at a record pace. So far this year, biotech companies have raised more than $32 billion in follow-on offerings, already the most ever in a year, according to Dealogic. 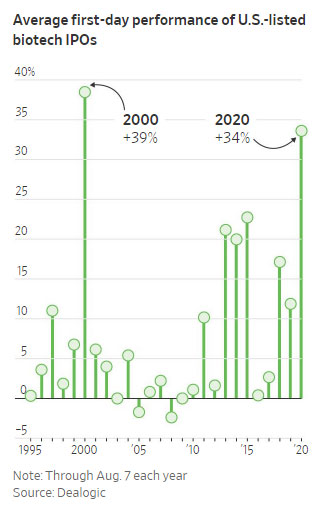 Many investors who have spent years analyzing and buying shares of biotech companies say the market’s enthusiasm for health-care companies might be overdone, particularly for companies that appear to be rising on bets that testing for Covid-19 vaccines will be successful.

One company touting a vaccine candidate is Moderna Inc., MRNA -2.43% which has seen its market valuation balloon to nearly $30 billion, up from roughly $7 billion at the start of the year. Moderna, which codesigned the vaccine candidate with the National Institute of Allergy and Infectious Diseases, is embarking on a Phase 3 trial.

Investors will soon have another coronavirus-related stock to bet on. A German biotech company, CureVac BV, is expected to list shares on the Nasdaq Stock Market in an IPO later this month, according to people familiar with the matter. Early Monday, the company said it hopes to raise more than $200 million in its IPO, according to an updated regulatory filing.

The company, which is in the early stages of developing a coronavirus vaccine, was in the news in March when the German government accused the Trump administration of trying to persuade CureVac to relocate to the U.S., The Wall Street Journal reported at the time. CureVac closed a financing round that netted it $640 million last month. 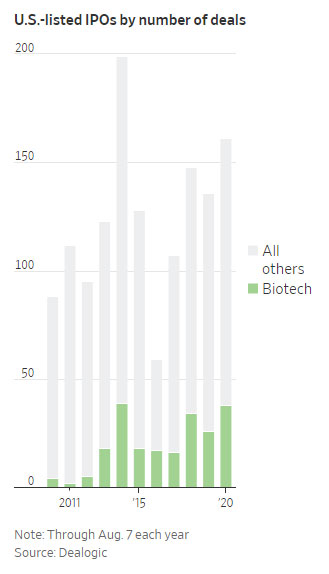 “It’s crazy,” said Marshall Gordon, a senior health-care analyst at ClearBridge Investments and a longtime biotech investor, referring to what he regards as the hype around early-stage biotech companies. He and his firm look at new companies coming to market, preferring to take a more conservative approach to selecting which stocks to hold, he said.

“We tend not to invest in a lot of IPOs because many are at an early stage,” Mr. Gordon said. “We want to wait till there’s strong proof of concept in humans, and we’re not willing to chase such early-stage technologies.”

Even as vaccine research and trials are being fast-tracked, few drugs typically advance beyond early-stage testing. According to the Food and Drug Administration, about 70% of drugs move on from Phase 1, which tests for safety and dosage. Only one-third progress beyond Phase 2, and even fewer are ultimately approved. While Phase 1 studies typically take several months, subsequent trials can take years.

Find out more or adjust your settings.

This website uses cookies so that we can provide you with the best user experience possible. Cookie information is stored in your browser and performs functions such as recognising you when you return to our website and helping our team to understand which sections of the website you find most interesting and useful.

Strictly Necessary Cookie should be enabled at all times so that we can save your preferences for cookie settings.

If you disable this cookie, we will not be able to save your preferences. This means that every time you visit this website you will need to enable or disable cookies again.